Chapter Zero | Table of Contents​
Chapter One | Introduction​
"
You do not have permission to view link Log in or register now.
makes jailbreaking a PS3 easier, faster, and safer than ever before! If you have a compatible PlayStation 3 on firmware 4.88 or lower, you can easily jailbreak your PS3 using only software! No hardware flashers, no need to take apart the console, not even a need to downgrade! Thanks to the team over at PS3Xploit, anyone with a compatible PS3 can patch their console and install Custom Firmware (CFW). If you have a CFW-capable PS3 the first thing you should do is back up your console's NAND or NOR flash to a FAT32 formatted flash drive. This should be done on every install, just in case your system needs the flash restored at any point in the process. After verifying your flash dump is proper, you can download the required patch for your console and install it all directly within the browser! This process will download a specific file to your console and "patch" the console so it's ready for CFW. After verifying your PS3 has been patched successfully, you can simply reboot your console, take a 4.88 CFW of your choice, and install it directly through the XMB! In order to do all of this, you MUST have a compatible PS3. All Fat/Phat models work! If you want to perform this on a Slim console, 20XX and 21XX models are all compatible. 25XX models that have a 3.56 or lower minimum firmware version will work, anything showing a higher minimum firmware will not. ANY PS3 MODEL HIGHER THAN 25XX WILL NOT WORK! This includes newer Slim (30XX) models and all Super Slim models. Although this tutorial was recorded on firmware 4.88, the jailbreak process with PS3 Toolset is the same on higher firmware as long as all of the software needed has been updated. The only differences would be a firmware-specific patch, which PS3 Toolset will download for you, and a different CFW matching your firmware version. If you see the video title and description show a higher firmware number than what is shown in the video, that means the PS3 Toolset has been updated for that specific firmware version." -
You do not have permission to view link Log in or register now.

Before we can start jailbreaking your PlayStation®3 Console, you will need to check the Minimum Firmware Version. In order to do this, you will need to connect your Console to the internet (if it isn't) and head over to the built-in web browser, and press the "

" (triangle) button on your Joystick. A side menu [
You do not have permission to view link Log in or register now.
] will pop up, after that you need to go to tools -> Cookies -> "Allow", below "Cookies" you will see an option that says "JavaScript", make sure that is set to 'On". make sure that homepage is using "Blank". After that has been done, you will need to clear out your web browser by pressing the "

" (triangle, again) then going to "Tools" and clearing out the following: "Cookies", "Search History", "Cache" and "Authentication Information".

Once you have completed part one of chapter three, you can now exit out of your web browser, wait 5-10 seconds and go back to it, this time it should show a blank page with nothing on it.

" (triangle, yet once again), click on "File" ->"Address Entry" and press "X" on your controller, A Address bar is going to pop, asking you to put a link in. You want to type "ps3xploit.com" and enter, You should land on a page that looks like this: 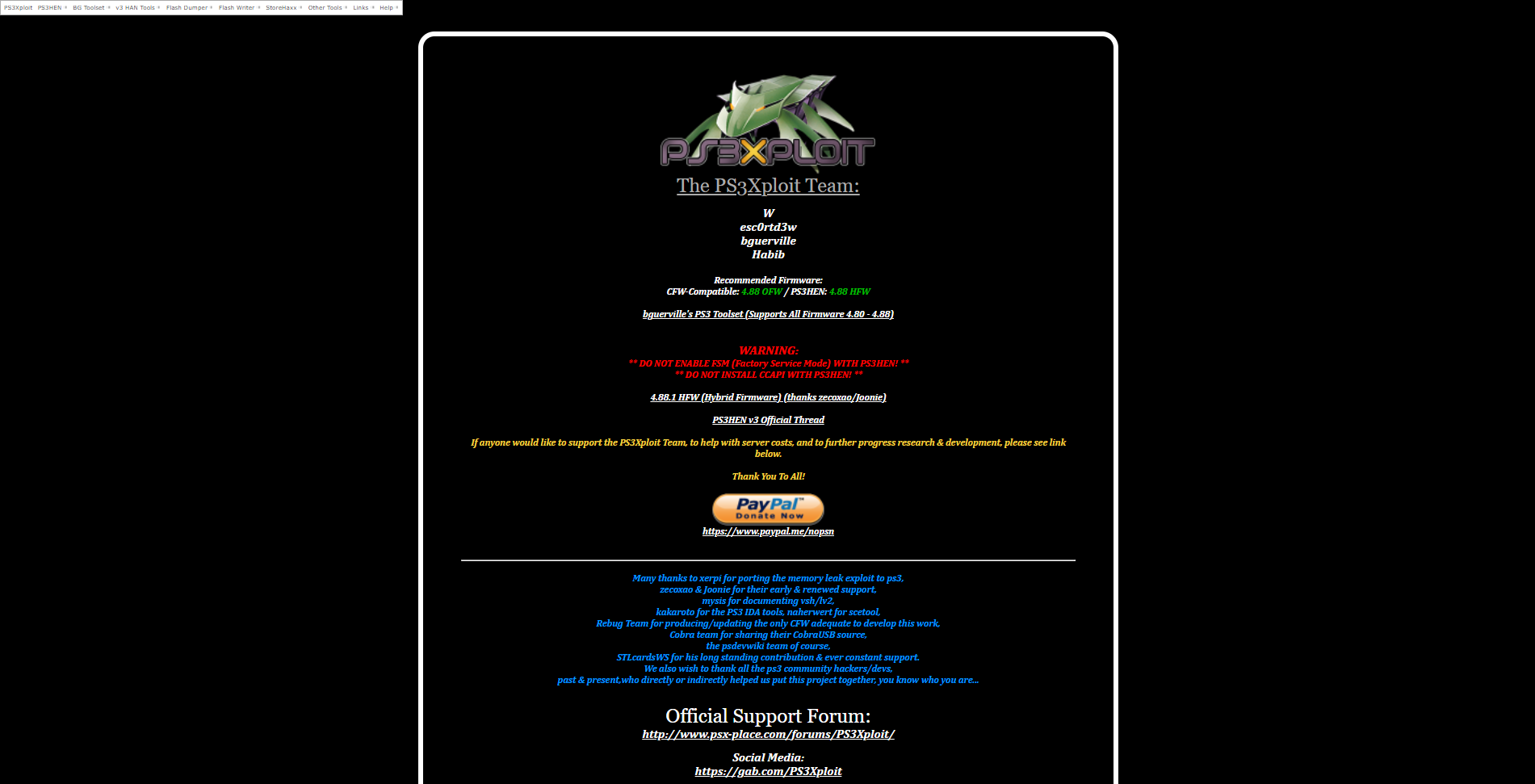 Take your attention to the top left bar, head to "BG Toolset", then in the drop-down menu, go to "Main Site". The Main Site should look like this:
( IF A SCREEN POPS UP ASKING DO YOU WANT TO RUN THE PLUGIN?, SAY YES ) 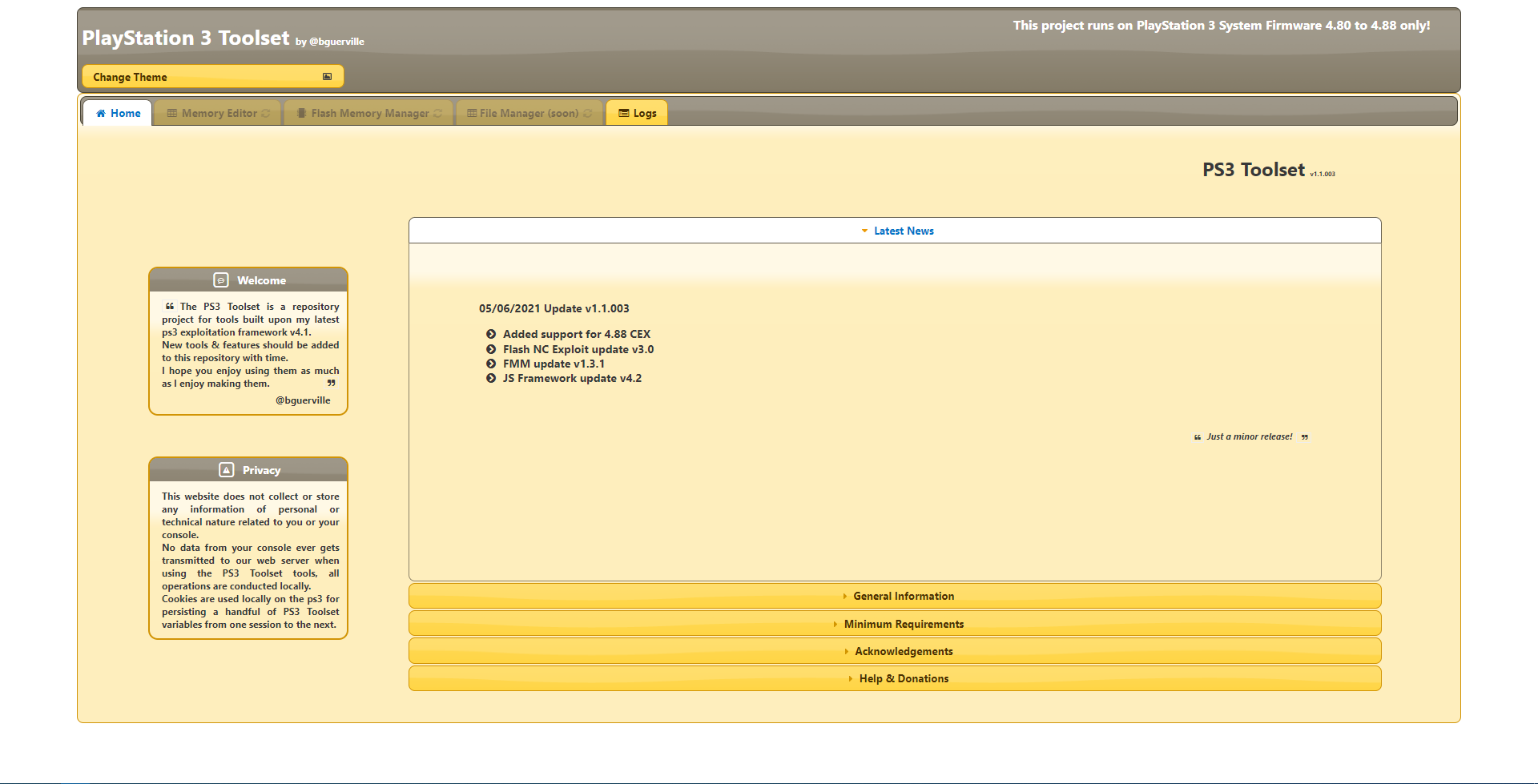 Now that you are on the Main Site, click on. it is going to do some initial setup, you will see it on the top-right. Wait for it to complete. Your system will beep.

in BG Toolset, click on "Flash Memory Manager", it will open a new tab, this is what you should be seeing after a few moments: Now, where it says "CFW Compatible PS3", it should show a green checkmark [

], if it does, you can proceed with this tutorial, if not, stop here. otherwise, you risk bricking your console. however, you can install HEN, however, this tutorial does NOT cover it.

Now you must plug your USB drive that is FAT32 in the far right port. Once that is done, press the "X" button on your controller while high lighting "Flash Memory', then "Save Flash Memory Backup", IT IS A REQUIRED STEP. A screen will pop up asking you "Save As", you want to select your USB Drive. it is called "dev_USB00x" click on it and "save", wait a moment.

A notification should pop up saying that the dump process was completed successfully. 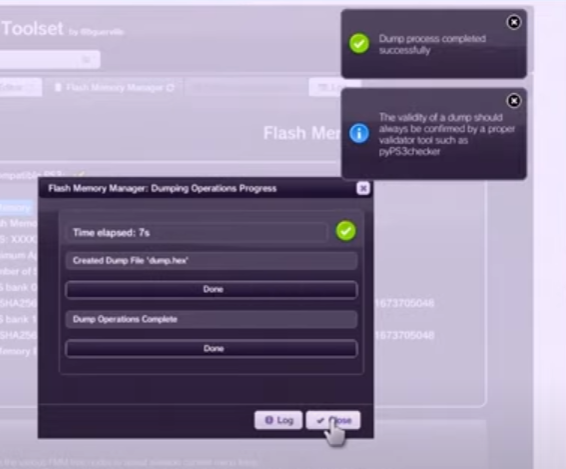 Once the dump is done, select Flash Memory Patch. Next, choose Load Patch Via HTTPS
Note: Depending on your model, it may take less or more time to load the patch. NANDs will take 3-4 seconds, and NORs will take a minute or two.


After you load the patch via HTTPS, close the dialog and click on Flash Memory Patch again, this time selecting Apply Loaded Patch.
This may take 3-4 seconds depending on your console's flash memory type. NORs will take 2 minutes or so.
Make sure to say Yes to the dialog that warns you about patching.
After it is done and says "you may now restart the console" go ahead and do so.

Chapter Four | Installing Custom Firmware​
> Chapter Five, Part One
Now, you are ready to install Custom Firmware!
I recommend EVILNAT for most users, REBUG can be used if you wish to run Linux or make games/homebrew apps.

Download EVILNAT here, once it's done downloading extract the RAR and take the PS3UPDAT.PUP file and put it in a folder named UPDATE
Put the update folder in a folder called PS3. Now put that PS3 folder and put it on the root of your USB.
The folder structure should be as follows: X:\PS3\UPDATE
(note, your USB can be any letter, X is just an example)

> Chapter Four, Part Two
Now insert your USB into your PS3. Turn it on if it's not already, then scroll to the left in the XMB to System Settings, and choose System Update. Select Update Via External Storage, and it should scan. If it doesn't, make sure your USB is formatted in FAT32 and uses the GPT partition table. If it finds it, go thru the license agreement, and select I Agree at the end. now let it copy, and update the system. Once done, it should reboot. (Note, if the progress bar jumps to 100, that's normal)

> Chapter Four, Part Three
If you get the EVILNAT boot logo, your done and have successfully jailbroken your PS3!

Chapter Five | Credits & Other Information​
Credits:
Zaid#1195 - Initial Write of Guide/editing
JamesIsWack#8330 - Completion / editing
MrMario2011 - Information from his channel and guide tutorials.
Want to contribute to making this tutorial even better / clean up? contact me on discord.

Notes from JamesIsWack:
Hey there, JamesIsWack here.
You probably don't know who I am, I don't use forum sites much. I mainly help on the Playstation Discord server.
I'm pretty experienced with PS3 modding and would like to address some things most people don't know about.
First of all, QA Flags are bytes set in your console EEPROM, that allow you to have Debug Settings. They do not directly give you the ability to downgrade. You must enable System Update Debug in order to downgrade.
Now, the next thing I want to go over is Flash Memory Backups. When using BG Toolset, it's not really needed to make a backup, but if your console loses power during patching and you don't have a backup, well your kinda screwed. Now if you do have a backup, you can restore it with a hardware flasher.
Now, those people wondering about REBUG CFW, the reason we only have 4.84 REX/DREX is that REBUG Team quit. We will miss them greatly
Next, I want to go over why some consoles cant use CFW. Sony messed up on the key signage in 3.55, so consoles with that minver or lower contain those keys. If your console is on 3.55, you don't need to patch, higher or lower does need it. Now, consoles with a higher minver will not have these keys present, and CFW cannot be installed.
Ok, the last thing, RAPs are licenses, needed for PKG/digital games/DLC. They are decypted into RIFs and put into your home folder. example: dev_hdd0/home/00000x/exdata
You can find these yourself, not helping ya with that (at least publicly) Some games may also use EDATs, which in turn are used with RIFs to decrypt. Mainly PSN uses these, such as for avatars or DLC.
That's really it, happy modding.

- This thread will be maintained by Zaid and any others who volunteer.

If you think we messed up a step or two, or miswrote something, again, please do not be afraid to contact us. you can find us all chilling in the #PS3 channel on

Check out the PlayStation⭐Homebrew community on Discord - hang out with 11,174 other members and enjoy free voice and text chat.