This is a small tutorial explaining some GSC Basic Scripting!

Before we begin, id like to make it clear that i do not support editing menus and calling them yours! aka leeching!

Things i will cover in this tutorial;
- Editing Shaders
- adding a simple function
- understanding/using #includes
- setting up
- a little about the syntax

I will be using one of my own menus as an example, but what i will be covering will be identical.

Setting Up
their are alot of programs you to create a GSC you can use;
Notepad ++
GSC Studio- highly recommended
limepad
etc

when editing the shaders, you cant really be wrong when changing the value of the numbers, this is where your artistic skills come in!.

this is where the shaders are stored, this can be found under Storeshaders, Shaders etc, but all menus will have it somewhere!.

to understand the numbers use this as note in your script. //x, y, width and height
so the number after the bracket represent the x axis, y axis, width then height!
the brackets before these number (em_bg_ani_octane) are also shaders you can use to add to your menu, but you must precache them in your init(), i will explain this more later on.

editing the menus colours;
the numbers inside these brackets represent the RGB of your shaders, you can change the colour of your background and scroller, also other things like text which i will talk about later.

you can either continue to use number like 255 to assign colors use 0-1 to make it easier to make color shades, also their are RGB color sites where this come useful, ill leave a link at end of the tutorial.

This is where you would edit your menus text, for example move where you want the text to be, make the text larger etc.
(CENTER,TOP, -7, 10); - This is the coordinates of where your text will be, feel free to mess around with the numbers! once again their is no right and wrong with this! however if you want it to be in line with your shaders consider the value between them both!.

this part requires a little more concentration as it can easily go wrong and freeze your menu! for this example we will be adding God Mode!.

first of all understand your "Menu Structure", this is an important part of your menu!

this is where your submenus are stored, for example your "main mods menu", feel free to change the names if they are blank like mine.

how to change the sub menu names? - self addOption("", "Can Change this, submenu::, "leave this", "Change this");
the reason i say leave this is because this is where the submenus link, ill explain more in next part!. 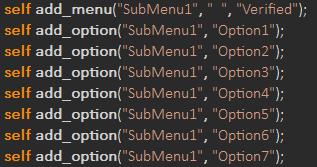 this is inside the submenu, where you will add functions etc, if you wanted to change the submenu names, you must also rename inside of this, for example rename the "SubMenu1" to whatever you called it in the submenu storage (above picture).

"Option1" is what the name will be for the function!, for this tutorial rename it to "God Mode".(or anything you want!)

behind the "::" is what you will be calling!, this must match the rest of the function or your game will freeze on load!. look at the picture below to understand more!.

now i will explain the rest on how to add a function, 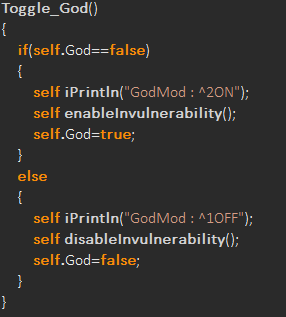 this is the rest of your function, also the receiving end of what you were calling in your Menu System.
i recommend adding a separate script file called "Functions" to organize your code better and make it easier to find your functions encase you make an error sometimes.

At the end of the tutorial i will add links to functions, GSC Studio, other resources you can use!

at the top of your script, or in main.gsc, you will see these!. think of this as info from another file, so when you are adding these, you are adding contents from other gsc files into yours, then you can add stuff to your menu!, if you are using a "Menu Base" then you should already have the important ones you need!

however this code-
self maps\mp\_gscfile::funcName()
would allow you to add to your menu/script without including it, i suggest sticking to the #includes if you are new to GSC Modding!.

i will update this thread soon with how to:
-add weapon scripts
-changing action slots/ used to assign controls for your menu
-much more!

You do not have permission to view link Log in or register now.
- GSC Studio

You do not have permission to view link Log in or register now.
- Shader Previewer! (doesn't work for internet explorer, install opera)

You do not have permission to view link Log in or register now.
-RGB Colour Editor
[C++] Bo2 CODE THREAD | CabConModding -Functions Thread

You do not have permission to view link Log in or register now.
- 1 of the best menu bases

Credits;
@ConnorWardx - For making the tutorial!
@thahitcrew - For his web tools!
@Alt - For his Functions thread!
@CabCon - Learning from his previous tutorials
@StonedYoda -For his Menu Base
Last edited by a moderator: Apr 17, 2016

Really. Did you think that, there was a need for another one?
S

Procyon said:
Really. Did you think that, there was a need for another one?
Click to expand...

thanks for the compliment -sniped-
Last edited by a moderator: Apr 17, 2016

ConnorWardx said:
thanks for the compliment -sniped-
Click to expand...