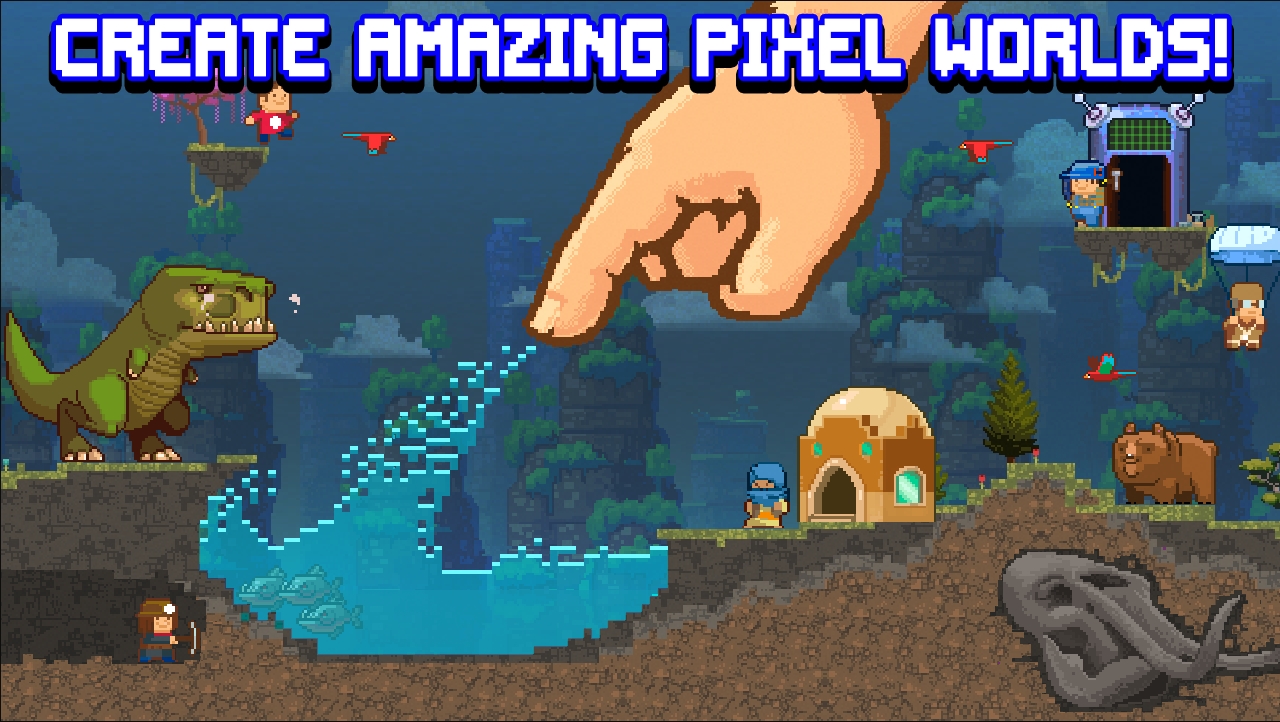 Craft a pixel paradise or destroy the world with your Godly 8 bit touch in The Sandbox Evolution, the #1 pixel art world building game.

Build a world that’s custom crafted for fun, with advanced physics, over 170 elements and fully controllable heroes. Craft a pixel dungeon, puzzle, city or anything in between - In The Sandbox Evolution, your world can be up to 10x bigger than in the original Sandbox game. Create a game, make pixel art, or craft worlds with ambient life, traps, platforms and enemies.

The universe is yours to build in The Sandbox Evolution. There are no limits to your creativity and imagination!

Ghostbusters return to The Sandbox Evolution! Snap up the 4 heroines, Ghosts and campaign for a limited time only!

BUILD A WORLD PIXEL BY PIXEL
- Craft a pixel world from scratch, or use templates
- Tap to drop elements, pinch to zoom & pan to scroll
- Build worlds up to 10x bigger than in the previous Sandbox game

CREATE LIFE
- Playing God starts with a tap. Add Dogs, Bears, Sabertooth Tigers and more to your world
- Create trees and plants to add beauty to your world
- Craft a city with Houses, Castles and Igloos
- Create dynamic life on your world with AI Humans

DESTROY THE WORLD OR CREATE NEW TECHNOLOGY
- Destroy it all with C4, Meteorites, Nitro, TNT or even a Nuke
- Craft tech like Batteries, Crosswires, Bulbs, LEDs, Sensors and more

BUILD A GAME OF YOUR OWN
- Craft game elements like 4x4 pixel blocks, platforms, portals, traps and enemies
- Video game maker features controllable hero characters for instant testing
- Shoot with Arnold, fly with Fujin and more
- Create your own game with 8bit pixel platformer levels in less than a minute

BROWSE & SHARE ONLINE
- Share your worlds with other players
- Search worlds by keyword or by tags (pixel art, music, arcade, etc.)
- Filter by the Newest or Hottest creations
- Rate your favorites and get inspired
- Follow your favorite Players and Top Creators
- Bookmark your favorite levels to revisit them anytime
- Save and Sync progress online with Facebook or Email
- Leaderboards for levels – Can you rank #1?

CHALLENGE CAMPAIGNS & DAILY QUESTS
- See the universe get created over 13 campaign levels
- Explore a prehistoric world, fighting Bears and Wolves with the Caveman
- Pixel art tutorials in the zen drawing Pixel Art Campaign
- Daily Quests: Challenge the best levels. Build your own for a chance to be featured
- Collect loot and use new power-ups like Turbo Boost

NATURAL DISASTER GAMES
- Disasters Campaign: A new campaign based on real natural disasters
- Tornado: Guide the tornado and blow the world away (literally)
- Earthquake: Shake it up with the epicenter generator
- Lightning: Shoot lightning from your fingertips
- Nuke: Drop the ultimate bomb

Each new Update of The Sandbox Evolution will bring even more elements, heroes and campaigns!
You’ll see… no one could ever dream a better world than yours!

Download The Sandbox Evolution and build your world today!